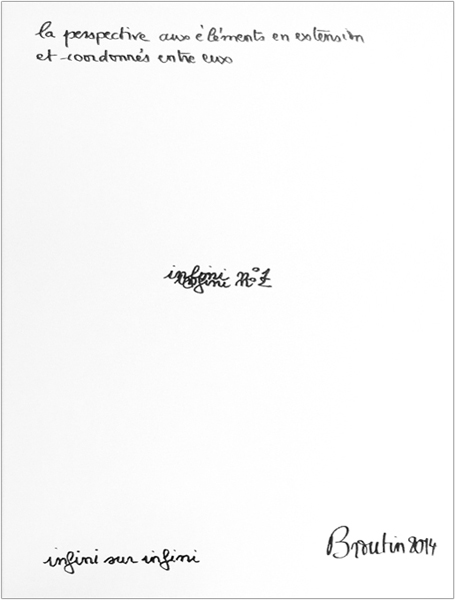 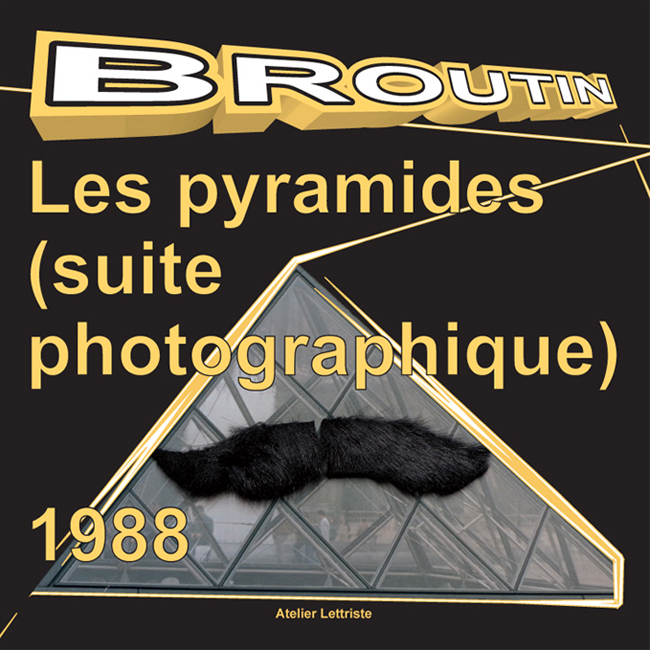 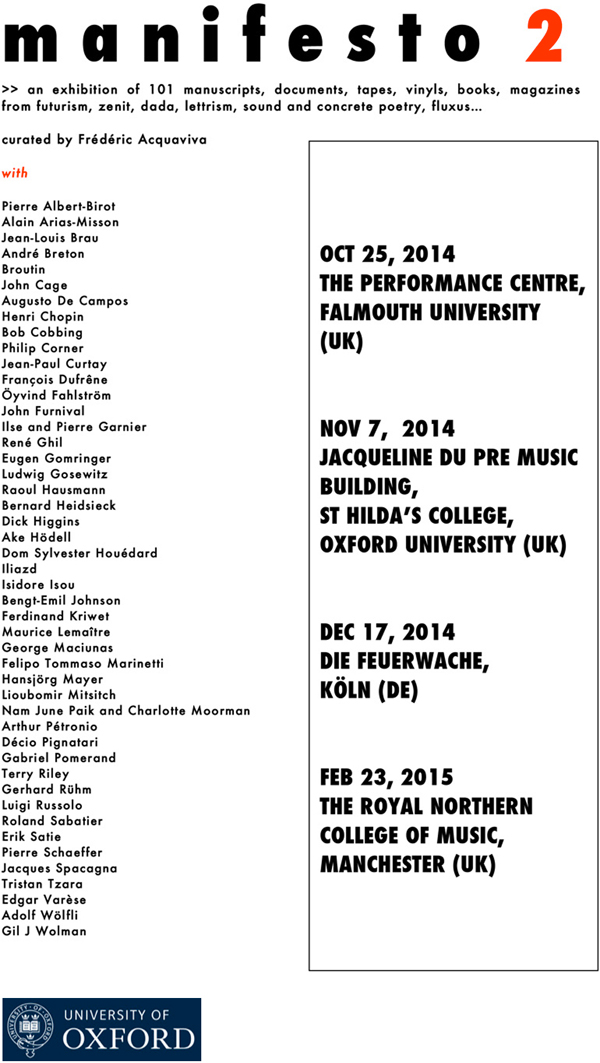 MANIFESTO captures the vibrancy and immediacy of manifesti, from Futurism in 1909 to 1960s Fluxus via Lettrism. 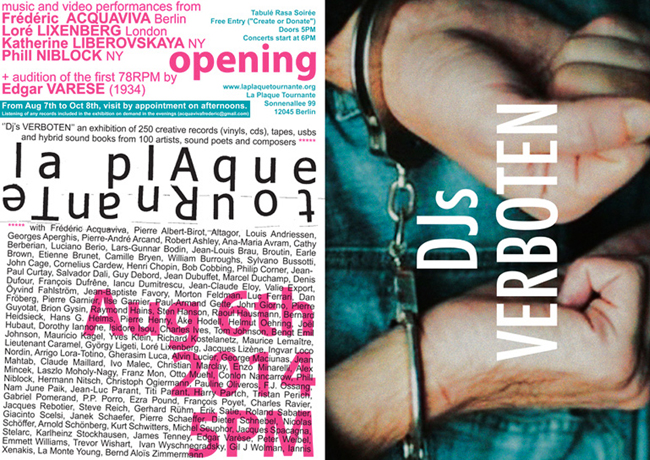 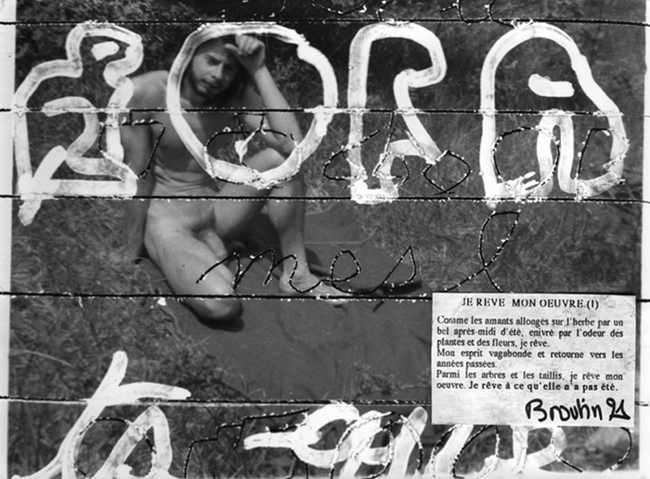 Like the lovers stretched out on the lawn of a lovely summer afternoon, drunk on the odor of plants and flowers, I dream. My mind wanders and returns to years ago. Among the trees and shrubs, I dream of my work.
Series of 9 photographs exhibited in Paris, Pierre Lescot Gallery , 1991. Photos taken in Trézan by Sylvie Fauconnier et Broutin. This edition is composed of 20 numbered copies signed by the author and 80 standard copies. 12 pages, cm 21x15. English translation by David Seaman.
Numbered copie 40 €, standard 7 €
Editions Atelier Lettriste | workshop@gpbroutin.com 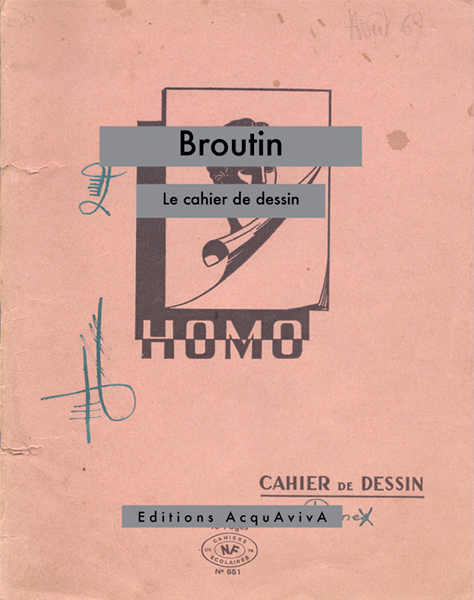 A facsimile of the first works by Lettrist artist Broutin, who joined the French avant-garde movement in 1969. This pamphlet features asemic writing by Broutin, a kind of wordless writing characteristic of Lettrist art that has no meaning in terms of language.
Pages 36, 24 x 18,5 cm, paperback, staple bound. Edition size: 100.
Price 20 $
Available by printedmatter.org
195 tenth avenue, New York 10011
Editions AcquAvivA | acquavivafrederic@gmail.com 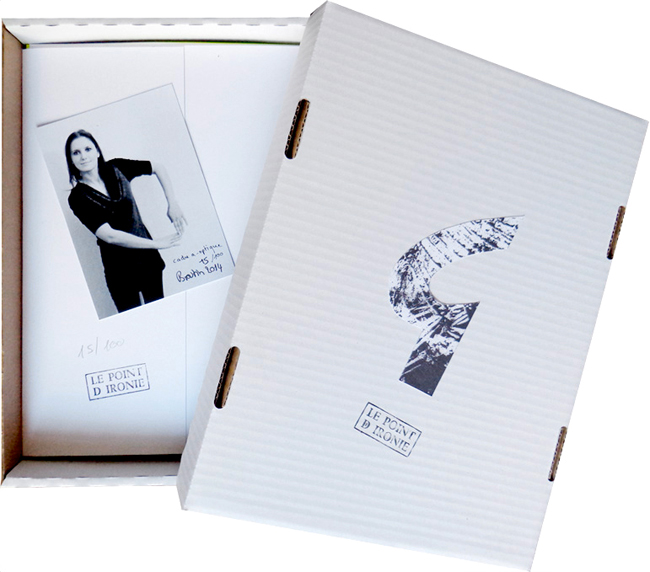 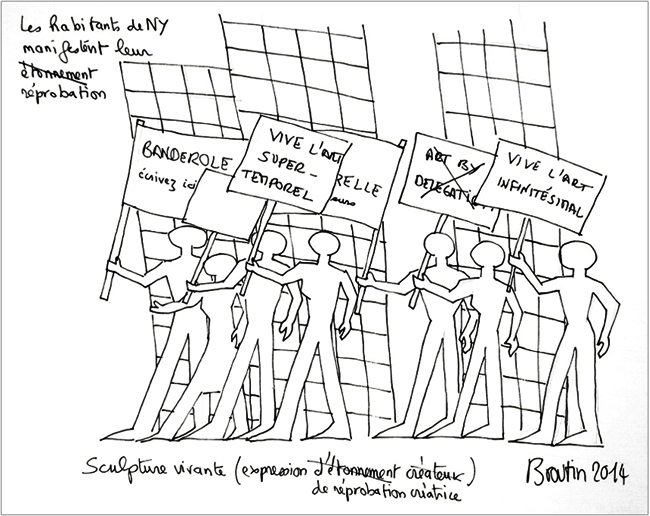 New York, February 23, 2014
New Yorkers organized a protest march in the streets of SoHo. The demonstrators came from every borough to express their astonishment, indeed for the most engaged their disapproval, of the title and content of the show Art by Delegation organized in Brussels.

John Smith, a member of the American branch of the Committee for Creative Vigilance: I don't understand why the show is called Art by Delegation. Since it is supertemporal art with the participation of the viewers, based on an idea of Isidore Isou, the creator of Letterism, the show could have simply been called Concerning the Supertemporal.

Ann Pandergast is among the most determined demonstrators: We call on all art lovers to write their creative slogans on the supertemporal banner.

James Trawisky participated in the demonstration, but expresses reservations about the radicalness of some of the entries: After all, this show can be considered an advance that takes into account the realities of public awareness and the state of the market. If it is a further step toward the propagation and recognition of this avant-garde movement, then why not? 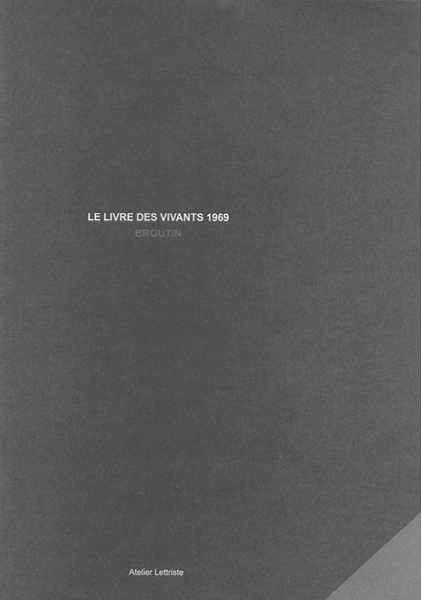 
Dear Edouard Berreur,
I am currently working on new editions of some of my previous works. I am writing to you about The Book of the Living, a small booklet that you were supposed to publish in 1970, for which I had given you the original drawings for the deluxe edition.
Through the friendly intermediary of Frederic Acquaviva, last year I was able to lay my hands on an ordinary copy of it; this is the first time I had seen it. The facts are disappointing: the present edition was only printed with a few copies, and was never distributed. The deluxe editions were never done. After all this time, I am not looking to start a confrontation with you – as I should have done earlier – but rather to find a positive solution which will finally permit me to give this work its place in my bibliography.
I am inclined to help you arrive at an outcome that satisfies both of us. Let me know what you would suggest on your part.

This edition is composed of 20 numbered copies signed by the author and 80 standard copies. The first edition appeared in the journal Ipergrafi no. 7 in Paris in 1970. Published in only a few copies, it was never released. 24 pages,  cm 21x15. English translation by David Seaman.
Numbered copie 40 €, standard 14 €
Editions Atelier Lettriste | workshop@gpbroutin.com